Harat al-Mudayrib, a single settlement core nestled within a ring of low ophiolite hills, is overlooked by Hisn al-Mudayrib, an enclosure-type fort used in times of strife. The settlement historically played a central role in the Sharqiyah region and beyond due to important trade connections with as far afield as India and East Africa. The wealth and artistic influences resulting from this trans-cultural lifestyle had a profound effect on the ethnic makeup of the inhabitants and, consequently, on the settlement’s architectural development. This is characterised by grand dwellings of stone masonry and sarooj, with multiple floors, courtyards and arcaded terraces.

Building on extensive fieldwork documentation conducted through building survey, terrestrial and aerial photography as well as interviews, this Documentation and Heritage Management Plan is intended to provide a commentary on the history and ethnographic background of Al-Mudayrib, its urban configuration and built fabric, as well as the surrounding falaj system of irrigation channels and associated bathing structures. Alongside, the project includes a Master Plan accompanied by guidelines and recommendations on issues of heritage management, conservation and development, as well as approaches for its implementation. 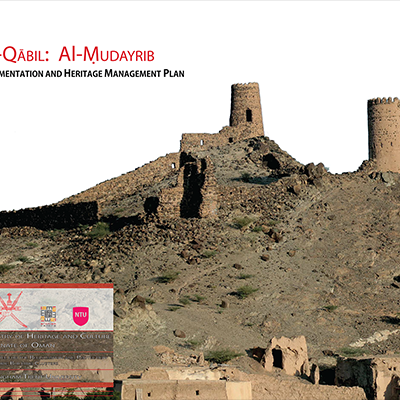