ArCHIAM’s film “M’Hamid Oasis Morocco”, documenting a restoration and recording project in the Moroccan Sahara, was recently a finalist at the XIII Istanbul International Architecture and Urban Films Festival.

The film, produced by Cinetecture’s Monika Koeck, features work undertaken in Ouled Youssef, M’Hamid, by ArCHIAM and Terrachidia as part of the project “Restoring, Recording and Inventorying the Tangible and Intangible Cultural Heritage of the M‘Hamid” funded by Barakat Trust and University of Liverpool. The film was one of only 38 documentaries selected from a total of 1,036 films submitted by filmmakers from more than 90 countries for the event, organised by Istanbul Metropolitan Branch of Chamber of Architects.

“The work in Morocco will further the heritage impact activities of ArCHIAM, which has already spearheaded community-driven, public-private partnership initiatives in heritage management and sustainable tourism development in Oman. At Misfat al-‘Abriyin, in Oman, working closely with the local cooperative (Misfat al-Ahlia), Bank Muscat and the Ministry of Tourism, ArCHIAM is implementing a masterplan it developed in 2016, delivering several interventions to safeguard heritage and develop tourism infrastructure. The work at M‘Hamid continues ArCHIAM’s commitment to work with local communities across the MENA region to help oasis settlements realise their development potential.” 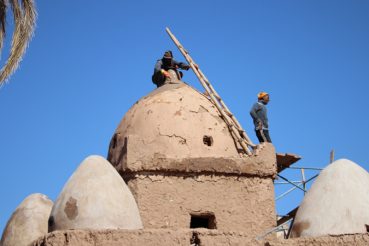 Restoring, Recording and Inventorying the Tangible and Intangible Cultural Heritage of the M’Hamid Oasis, Morocco

Recording and Documentation of Earthen Architectural Heritage of Morocco