The oasis of Izki is reputedly one of the oldest permanently inhabited sites in Northern Oman. Large amounts of Hafit and Umm an-Nar remains in the area in the form of beehive tombs and circular enclosures attest a continuous human presence in the area since at least 3000BC. There have also been discovered substantial Early and Later Iron Age remains, creating a clear link between the pre- and Islamic periods. Izki is also one of the main exponents of the famous Hinawi-Ghafiri split which stems from the extremely ancient Arabian tribal rift of the Adnani-Qahtan, Qays-Yaman moieties.

The settlement of Harat al-Yemen, in the Izki oasis, is certainly one of the more unusual of Oman’s oasis settlements. Located at the southern end of the Sumayil Pass that connects the Batinah Coast and Muscat to the countries interior, this heavily fortified tows stands testament to Oman’s at times conflictive past. The highly rectilinear street pattern is a likely product of a 18th century re-construction of the al-Yemen, but the antiquity of the Izki oasis as a whole appears to be attested by a mention in a stele to the Mesopotamian ruler Assurbanipal, dated around 640BC. This continuity of habitation, as well as a host of Hafit and early Iron Age graves in the surrounding landscape, have made Izki an important focus of archaeology in the wider region.

This HMP was commissioned by the HMC to assess the state of preservation of the settlement of al-Yemen and investigate the potential for re-use and restoration of the site. This documentation and heritage management plan pays close attention not only to the morphological development of Harat al-Yemen and its socio-political history, but also aims to integrate the wider cultural context of the oasis by aiming at the preservation of important archaeological remains nearby. 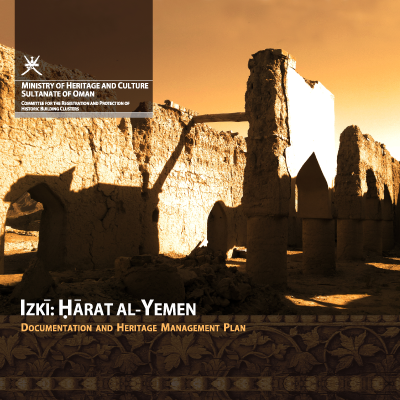